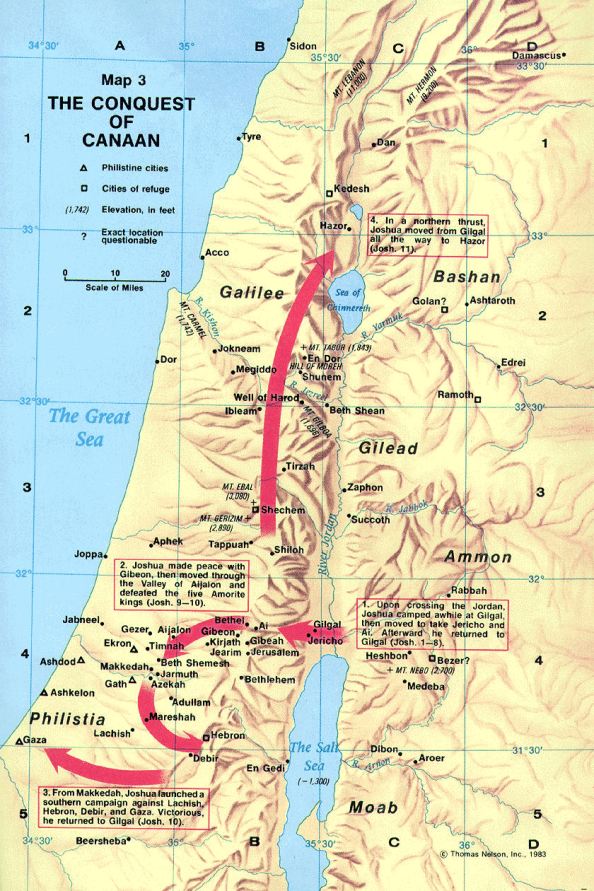 I have been a pacifist for as long as I can remember.  I understand the use of force is sometimes necessary in order to protect, but an offensive strategy of violence and destruction seems so … well, I was going to say, un-god-like … but that’s exactly the problem I have with this first testament conquering of Canaan.  God is the leader of a battle that destroys people, families, cities, farms.  There are a great many parts of scripture that I find offensive to my own set of values.  This chapter is one of them.  When I look at the map of “The Conquest of Canaan” (above), I see it like a football play book*, only, in the case of this war, “winning” meant genocide — the annihilation of whole people groups.

I can enjoy good strategy, and rooting for my team, especially in a TV show like “Game of Thrones.”  But in these chapters of Joshua, God seems so … so male, so violent, so uncompromising, so cruel.

We’ll see lots of sordid stories as we read together.  There are many of characters we may wish weren’t in the Bible at all … but they are.  They are a part of who we are.

My own great grandparents told me stories of our life in Germany.  After doing some family tree work, I know that my ancestors were Jewish and Lutheran and Catholic.  I know the shame of having a history we may not want to embrace.  There is no greater icon of evil than Adolf Hitler and the Nazi party.  My mother told stories of how she was instructed to tell the people in school she was “Scandinavian” because she had blond hair and blue eyes.  “DO NOT let anyone know you are German.”  Yet, my great grandmother would tell me stories of the children running down the castle hill in

The ruins of Weinsberg Castle in Würtemberg, Germany

Weinsberg, Germany, as a child, laughing and playing, a re-living the battles of yesteryears.  My family history includes one of the worst battles of the German Peasants’ War … a battle Martin Luther riled against.  Growing up German Lutheran, I revered Luther.  And as a seminary student, I found great hope in the works of Bonhoeffer and Niebuhr and Tillich … all great German theologians.  I guess all of our family/faith histories are filled with good and bad and all the stuff in between.

This story of Joshua taking the Israelites into battle throughout the region of Canaan is as formational for the Hebrew people as the story of Martin Luther was for my family, Columbus is for Americans, or the Alamo is for Texans.  It shapes us, our values, our worldview.  This stories, these battles, is a defining moment for the people of Israel.  This is the fulfillment of what they had been promised generations before.  This is God being with them.  And the conclusion is a reaffirmation, a re-choosing of God …

“Now fear the Lord and serve him with all faithfulness. Throw away the gods your ancestors worshiped beyond the Euphrates River and in Egypt, and serve the Lord. But if serving the Lord seems undesirable to you, then choose for yourselves this day whom you will serve, whether the gods your ancestors served beyond the Euphrates, or the gods of the Amorites, in whose land you are living. But as for me and my household, we will serve the Lord.” (Joshua 24:14-15)

So, we look at our stories and continually ask, through the lens of Christ, through the lens of history … what does this say about the God who we choose and who has chosen us?  and what does the story say about us and our relationship with God?  For me, the take-away for my faith this week, is this “choosing” of God even when it involves things we don’t like, battles that scare us, wandering in the middle of nowhere, not understanding the reason for pain and suffering … in all of that, we, like Joshua can “Be Strong and Courageous” as we choose to serve Christ.

“Have I not commanded you? Be strong and courageous. Do not be afraid; do not be discouraged, for the Lord your God will be with you wherever you go. (Joshua 1:9)

As we struggle to be obedient to the hope of Christ, the love of God, the healing of the Spirit in the midst of our own battles of life … we can remain strong, bold, and confident that God’s way is the path of good, of graciousness, of resurrection, and of life.

*as Dwayne points out to me, I have no idea what a football playbook looks like. 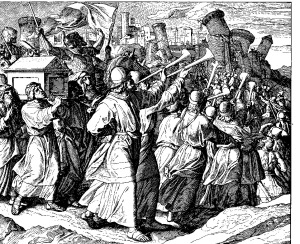 As we were going over this week’s story today during the education hour, I was suddenly struck by the similarity between the fall of Jericho and the destruction of the cities of Sodom and Gomorrah in Genesis. In both cases ,the cities were slated for complete destruction by God. In fact, not JUST destruction. Joshua declares that anyone who even attempts to rebuild Jericho will be cursed! As far as I know, no other city was so singled out for eternal oblivion when the Israelites conquered Canaan.

But it’s not just a matter of the devastation.

In the story of Sodom and Gomorrah, the cities are to be wiped from the Earth, along with all the inhabitants, except for Lot and his family. Jericho was to be burned to the ground, except for Rahab and her family. Lot was visited by two strangers, and Lot showed them hospitality, even to the point of putting himself and his family in danger. Rahab welcomed the two spies from Israel into her house, even hiding them from the authorities in Jericho.

Of course, it’s not identical. Nobody gets turned into a pillar of salt in Jericho, and Sodom and Gomorrah weren’t besieged by any army, but I still find the parallels interesting. I wonder what was the sin of the people of Jericho that was so great, it warranted the same sort of treatment as Sodom and Gomorrah. I know that the “standard” explanation for the fall of Sodom and Gomorrah was the homosexuality of the residents there, but there is a counter argument that it was the violence and lack of hospitality that was actually the sin illustrated by the story. As far as I know, there is no mention in the Bible of the exact reason why Jericho was to be eliminated so completely. I wonder if it wasn’t the hostility of the city, in opposition to the hospitality of Rahab.

No real point to this. Just something I was wondering about. Any thoughts?

This week opens with what I think is one of the

more bizarre stories in the Bible. The first city the Israelites are to conquer is Jericho. But rather than attack head on, or try to sneak in via some ruse, God instructs Joshua to have the army hold a parade! They are to march around the city once each day, blowing the trumpets but making no other sound, and then return to camp. Then they are to repeat this procedure five more times. Then, on the seventh day, they get to vary it, marching around seven times, and then finally shouting, which will bring down the walls so they can all rush in at once and destroy the city.

To me, these sound like ludicrous instructions! I can understand that the marching around might confuse and dishearten the defenders, but why would the walls care about that? Why would God ask them to do something so seemingly pointless? After all, if God were going to destroy the wall, I don’t think he needed the army’s help to do it. Was this just another test, to see if the Israelites were willing to listen to God’s instructions? Was it something more practical, like acting as a distraction while “inside men” weakened the wall? What was the point?

I don’t have any answers. I’m just asking the question.

Look for this week’s reflection on Monday Morning.  In the meantime, make comments or ask questions here.  Or on the facebook group page, or on Twitter using the hashtag #apcthestory.